Reilly was 18 when he suffered a stroke following a terrible car accident on his drive to school. He contacted Tanja to tell his story, and to talk wanting to raise awareness for brain injury and become a fundraiser for SameYou.  Despite a set back at his most recent hospital visit, Tanja has been blown-away by Reilly's constant positivity and determination to help others understand about brain injury, especially younger people like himself. Here's Reilly's story.... 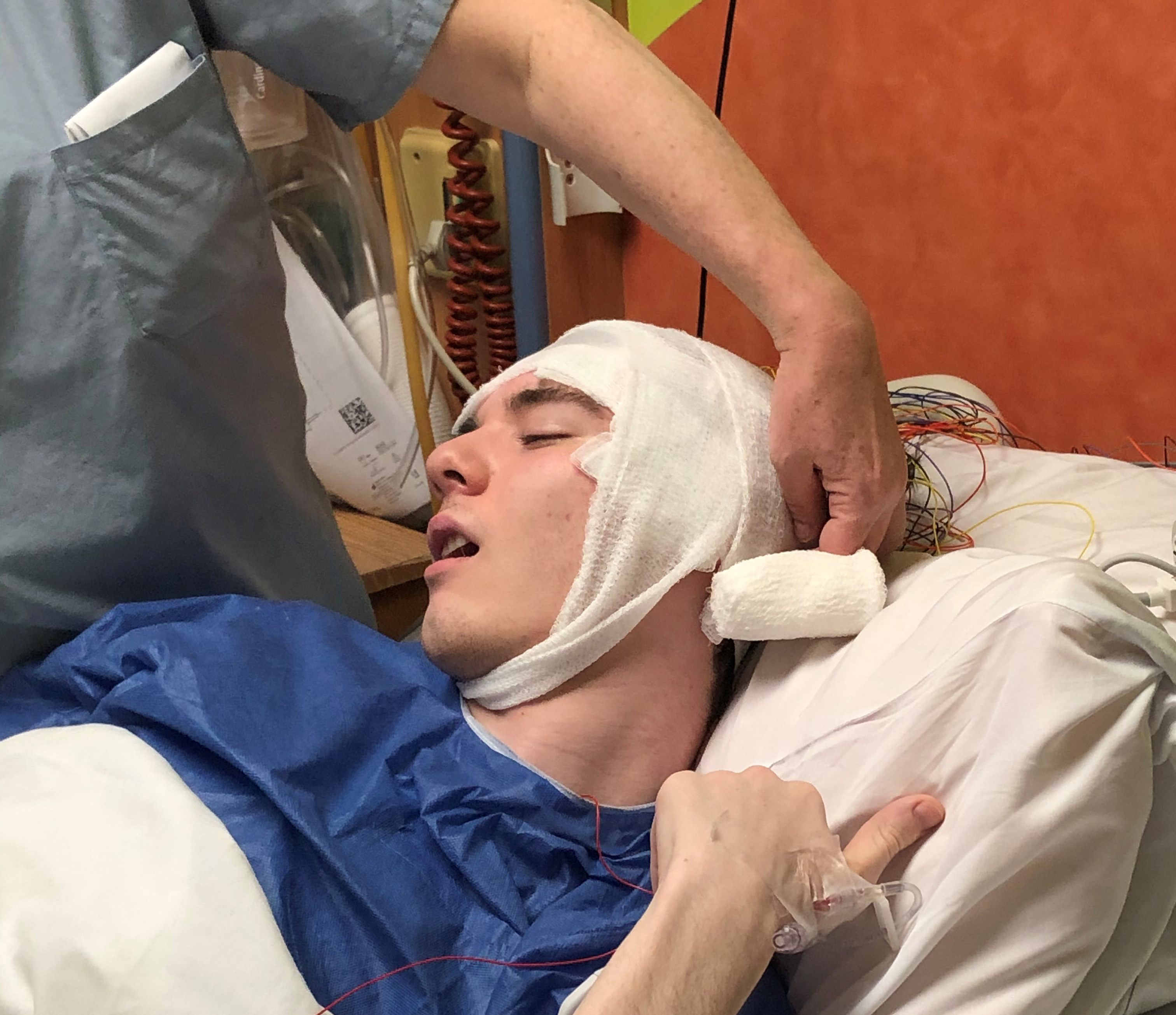 I’ve always been a really healthy kid. I never get sick during the flu season, I never catch colds, I had never been to the hospital before my accident. Never in my wildest dreams (or should I call them nightmares) did I think that I would have a stroke at 18 years old. I learned in health class that males from the ages of 20-39 make up .02 percentage of the annual U.S stroke totals. And I’m under that range.

It all started when I was driving in the car on the way to school on 28th January 2020. I had driven to school a 100 or so times. It was muscle memory for me. But on this morning, I had an enormous car crash. A crash that ended up with my car slamming into a giant tree, all because a lady forgot to signal. I don’t remember much, my head was killing me, I saw stars, and everything went black. I woke up in the trauma unit with blood and vomit all over me. The nurses assured me I would be fine. They rolled me over very carefully and put me into the MRI machine. My parents came rushing in, worried and scared but the doctors assured them I would be fine. The MRI results, they said, were clean. A concussion was the extent of it they said. Bruised ribs, bruised thighs, a few cuts, but at least I could go home.

I didn’t know this at the time, but I had a traumatic brain injury (TBI). The blood vessels inside my brain were severely weakened, they had not burst, they were not leaking, but were BADLY damaged. And so for the next 24 hours, my life went on as normal. But the next night, things took a turn for the worst…

The first thing that I remember going, was my vision. It was blurred and I felt like I was in a haze. That feeling you get when you forget to clean your sunglasses and their is fog all over them. Then I forgot where I was, what I was doing, what was going on around me. The final thing that scared me to death was the worst headache I had EVER HAD. My parents were circling around me asking me questions which I couldn't answer them - I could barely hear what they were saying. I was in and out of it for the next 45 minutes on the trip on to the hospital. I was emitted immediately and was put through neurological and stroke protocol. They had me do what seemed to me were a bunch of silly tests I didn’t want to do. They had me lift up my arms, I could only raise my left arm. They poked my fingers and toes on the right side and asked if I felt anything. I did not. After a while my mouth went numb, and from what the doctors told me afterwards, the stroke had hit. They had rushed me into testing, both MRI and CT scan. The weakened (and enlarged) blood vessels (also known as an aneurysm) had burst. I had what was called a subarachnoid hemorrhage meaning that blood was released into the area surrounding my brain. I was rushed into surgery to try to fix the burst vessel and stop the bleeding. Thankfully, I had some AMAZING doctors, surgeons and nurses. They stopped all bleeding and repaired the blood vessel.

I soon realised that this was not the end of my journey, it was ONLY THE BEGINNING. I had a long recovery in front of me as I had suffered from paralysis on the right side of my body. My leg was extremely ineffective, my arm was weak, and the right side of my mouth couldn’t clench. I also had trouble remembering things that were easy for me, like US presidents and Game of Thrones characters. There were days where I wanted to lie in my hospital bed and do nothing. One day, I watched the film 'Me Before You' and my nurse told me that Emilia had suffered a SAH and started the charity SameYou. The sky cleared, SameYou showed me the sunshine again. Knowing that Emilia suffered the exact same thing that I had gone through provided reassurance and comfort that I could make it through. SameYou provided multiple resources for me to help get adjusted to life after a traumatic brain injury.

I did PT for weeks, played memory games, rested, and slowly made my way back.

A follow up doctor's appointment in July unfortunately didn't go as I had hoped. MRI results found some CVST (Cerebral venous sinus thrombosis). More swelling that prevented blood from draining in my brain. I was given IV fluids and anticoagulants and the thrombosis was able to be treated fairly quickly. I was very lucky and understood from my research and knowledge about brain injury recovery that I was more likely to have a second stroke. This is exactly why I want to share this information with everyone. If people can expect setbacks in recovery, understand the risks, they will be less afraid. They can know the signs, and treat themselves or a loved one. 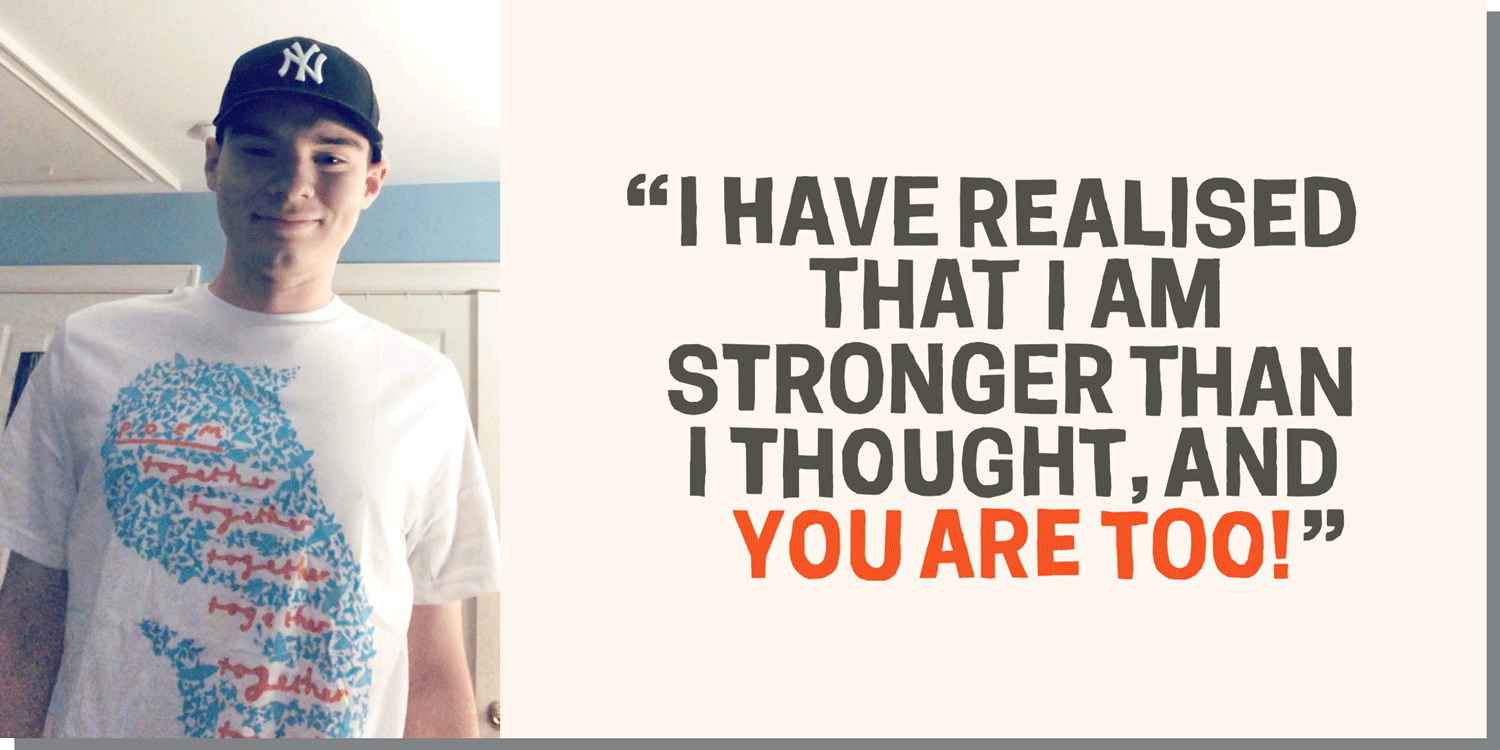 And now, I will get to go to University in the fall - we just had to declare our majors at university, and I am officially on the pre-med track! I want to make the biggest splash and biggest impact on brain injury and brain health and recovery I can! So, I intend to go into the medical field, and hopefully one day down the road, I will be a neurosurgeon. Wouldn’t that be quite a story!? Plus now (and after LOADS of practice) I am able to drive again!

SameYou helped me get here. SameYou helped me recover. SameYou can say they inspired an 18 year old stroke survivor to go into neurosurgery. I cannot thank Emilia and SameYou enough. Knowing that someone cares about me, my injury, my recovery, means more than anything. I want to pay it back. I want to tell my story to make all ages, but especially young adults aware of Brain Injury. And while I hope no one ever goes through what I went through, we NEED to be aware of it. I am here, to talk, to listen, to learn.

I will always be a member of the SameYou family, let’s educate the world on brain injury!

SameYou's goal is to end brain injury inequality for everyone. We have so much more to do and can't do it without your help.

We are living in unprecedented times, and need to ask, are you able to support us by donating today? Whatever you can give will help us to continue to fund new virtual services just like N-ROL which has already helped so many people during the Covid pandemic.