At the age of 42, I had a brain haemorrhage and aphasia, which is a communication disorder. After the operation I couldn’t speak for two years. My social network fell apart.

A little bit about Alan

I am now aged 72 but in 1992, at the age of 42, I had a brain haemorrhage and aphasia, which is a communication disorder.  At the time, I was a Head of Development for National Energy Action (NEA), a fuel poverty charity in Newcastle upon Tyne. All that went to pot.

The burst aneurysm happened when whilst I was spending quality time with a new girlfriend. She thought I was kidding! I was taken to Sunderland Hospital and they transferred me to Newcastle General Hospital for the operation. The NHS team saved my life. At that time, I was recently divorced and I had two daughters aged about 5 and 7. They came to see me in hospital with my ex-wife.

My Speech and Language Therapist at the Queen Elizabeth Hospital in Gateshead was very good but at the time it was too soon for any kind of recovery. My time and the NHS time were on different timelines.

How the aneurysm changed my life

After the operation, I couldn’t speak for two years. My social network fell apart. To this day, I have ongoing trouble with my speech. However, I haven’t lost my ability to write. I have haemiplegia on my right side and I have right-sided “blindness”. As a result, I can’t drive a car and I have to watch what I’m doing when I go through doors! I was taken back to work as an Information Assistant at NEA.

I started to question what my health specialists told me. For example, I was told that I wouldn’t make any more progress after two years but I have found that to be incorrect.

Nurturing a passion for aphasia

I have made a career out of aphasia by making all kinds of aphasia communicate for themselves. I started with Action for Dysphasic Adults (ADA) in London. I also started running Gateshead ADA, a self-help group where I lived. This was a group of eight people with aphasia. Although we all had aphasia, it was a revelation to me to witness how we were all experiencing aphasia differently. ADA helped me tremendously and this was a high point for me. People with aphasia helped me to gain a sense of self. ADA eventually became Speakability and is now part of the Stroke Association. 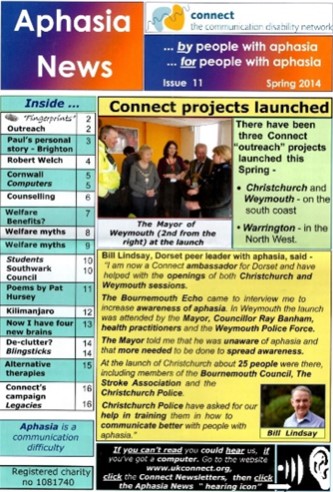 Through ADA I got involved with the chairperson of Aphasia Nottingham. I moved to Nottingham as Secretary of the self-help group. I was then headhunted to act as a trustee for a new charity, Connect, the communication disability network, in London.  This was a three-floor operation in Southwark. Connect put on groups such as conversation and art groups which adds a load of confidence in people with aphasia. I ran a group of people with aphasia that put together a policy paper on Connect’s attitude towards people with aphasia. It was accepted by the board. However, I was frustrated by the lack of input I had because I was the only trustee with aphasia. I told the Chief Executive that I would be of much more use if I was to be employed by Connect. I got the job against stiff opposition from other people with aphasia as the new Working Together Project co-ordinator.

For the next 13 years, I was employed for about four posts in Connect. As an example of what I did, I started and ran Drop-in, a coffee morning with a slant on aphasia, which was then taken up as an optional feature of 10 or so Connect projects around the country. I completed a “Drop-in Box” which could be taken to every group they started. I completed the policy paper on Documents for the Connect board. I also started, ran, and edited Aphasia News which was eventually distributed to 2000 subscribers, with a spoken word resume which accompanied it on the website. Aphasia News is a 16-page magazine that covered all things to do with aphasia. This was the best job I could have wanted or needed. It ended with my post as a member of the Management Team as the London Opportunities Manager. I was also Secretary to the Central London Aphasia Group, a separate self-help group. I retired in 2015 before Connect went into administration about one and a half/two years later. I have friends, with and without aphasia, which I regularly see in London.

I moved to Sheffield where I was part of a team that started the Sheffield Aphasia Group (SAG). We started an NHS/SAG Aphasia Befriending scheme which runs today. I left Sheffield when I moved to Tyne & Wear to be near my family.

I have books, TV, and cds. I walk, constantly. I am currently an NHS volunteer for the Newcastle upon Tyne Speech and Therapy department as an Aphasia Befriender. I have an autobiography, “Blackbird. Aphasia 50/50. A memoir” which was published in 2021. My book tells my journey with aphasia and how I found ways to move past it.

It amazes me that people with aphasia are cut out from organizations, committees and so on because of their communication difficulties.

My advice to someone with a brain injury

The only thing I can say to anyone who has a brain injury is to look inside yourself and take some of what the specialists say with a pinch of salt. Friends with aphasia are a lifeline. Join up wherever you see the support group of people with aphasia in your area. It is worth looking them up and making contact with those support groups. And join SameYou. Que sera, sera.