I’m a media producer and a survivor of a ruptured AVM that happened in 1990 when I was thirty years old.

A little about Elizabeth

I’m a media producer and a survivor of a ruptured AVM that happened in 1990 when I was thirty years old. Within a matter of minutes my left side lost all function, sensation and proprioception. I happened to be in Los Angeles at the time so I was fortunate to be rushed to Cedars Sinai hospital. After I underwent brain surgery to stop the bleed, my prognosis was that I would have no use of my left arm and hand and would have to use a cane and an orthotic for the rest of my life.

An innovative approach to at-home recovery 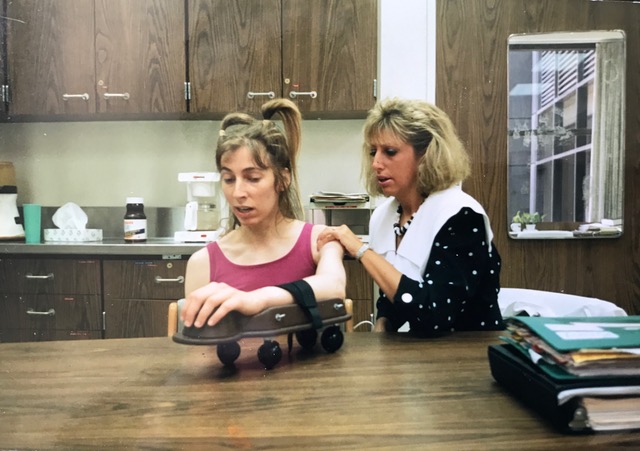 After intensive inpatient and outpatient therapy I regained limited function, but as I continued to practice the exercises I’d been taught, I found myself increasingly limited by spasticity. I was left at an impasse yet I was determined to explore how far I could take my recovery. After lots of self-observation and trial and error I discovered that the key to enhancing my recovery was to utilize my non-affected side to re-train my affected side.

I concentrated on slow, focused, nuanced repetition and visualization of proper movement. Instead of trying harder to move my affected side I took the lead from my non-affected side and practiced using the least amount of effort to create natural movement. I prioritized ease and grace rather than strength and adaptation. I had been given two sessions of biofeedback while in rehab and it sparked something in me. I utilized similar principles on my own - except without the technology. Back in the early 1990’s I had no scientific framework to explain the method I was using. It was only later when neuroplasticity began to be incorporated into rehabilitation did the approach to recovery that I utilized make sense in a more clinical context.

I am fortunate to have had a nearly complete recovery. I work on my body regularly and I continue to regain more and more function, sensation and proprioception even after decades. I've placed special emphasis on the issue of spasticity and have been able to keep it at a minimum.

A career helping others in their recovery

After my stroke, I earned an M.A. in Education from Antioch University with a focus on comparative medicine. I draw upon experiential and academic understanding of neuroplasticity, physiology, integrative medicine and established bodywork techniques. I've developed and taught workshops for those dealing with neurological injury as well as for medical professionals and caregivers. I've also written about my recovery and personal rehabilitation methods for publications including Natural Health and The New York Times. Thank you for the wonderful work that you're doing. I know how important it is for those with brain injuries to have the support of others who have been through a similar situation. It is especially beneficial when fellow survivors can offer not just encouragement, but practical ways to help keep the healing process moving forward after being discharged from clinical care.

I am particularly interested in working with younger survivors because I know first-hand the special challenges one has to face when dealing with a brain injury in the most productive and prime years.